If sexual intercourse began, as the poet Philip Larkin claimed, in 1963, nudity arrived at the Fringe the same year. In what became known as the Lady MacChatterley trial, 18-year-old Anna Kesselaar found herself in court on charges of indecency for taking part in what was referred to in the press as a “happening”: being wheeled naked on a trolley across a gallery at the launch of publisher John Calder and Traverse Theatre founder Jim Haynes’ Drama Conference in the McEwan Hall.

In a 2012 interview, the then 68-year-old Kesselaar rather brilliantly told the Scotsman: “I did it for art. And £4.” At the time, Kesselaar was branded “sick in mind, hand and heart” by the city’s Lord Provost, and had to flee to London such was the scandal.

Since then, the fringe has seen naked paint shows; naked magic and the “genital origami” of the infamous Puppetry of the Penis. After its debut 20 years ago (the Guardian: “Don’t try this at home”), the show toured 35 countries in five languages before being revived at last year’s festival in 3D.

Audiences are no longer shocked by people getting their kit off; we have a mainstream terrestrial dating show (Channel 4’s Naked Attraction) that consists of contestants staring at people’s bits. But at the fringe, where it is incredibly expensive to put on shows, it remains true that sex sells. Even when the nudity involved has nothing to do with sex. The nakedness I see in a fleshy three days spans from profoundly moving to cheeky, mindbending, gratuitous, unnerving, hilarious and disarming.

It begins in the Sanctuary space at Zoo Charteris, with the Russian company PosleSlov’s (Some)Body. In 50 minutes, the company “researches” whether a body has a soul. Nudity, the company tells me after the performance, is intertwined with “life, death, pain and love”.

Alyona Ageeva, the company’s founder, has a body in the same way that Egon Schiele draws bodies: muscular and spindly, and at the same time sensual, sculptural and functional. At one point, her feet move across the stage as if they are waves. There is a hypnotic moment in which three female dancers brush the long hair of a fourth, and I have an autonomous sensory meridian response (ASMR) – a supremely relaxing feeling that can be triggered by sounds such as those made by YouTubers, who do things such as crinkling paper and whispering in dulcet tones to help stressed-out millions unwind. A male dancer resembles Da Vinci’s Vitruvian man.

I am still processing (Some)Body when I take my front-row seat at the larger Zoo Southside venue, for Dep, where I am met by six, lit-up nude performers. The audience too, is illuminated. Minutes pass. A field recording of a Vietnamese funeral chant – choreographer Dam Van Huynh did six weeks’ research in the country – breaks the silence.

Van Huynh was born in Vietnam, but left after the war when he was five, and moved to the US. Now based in the UK, he was keen to explore his cultural heritage. One of the ideas that interested him was how, in Vietnamese culture, death is also a form of rebirth. When a person dies, “the family and community enact rituals that will enable the deceased to pass into another realm”.

When people talk about being on the edge of their seat, a penalty kick in a World Cup final comes to mind, or the million-pound quiz question. But throughout Dep, I am on the edge of my seat. Even when the only thing being anticipated is stillness. At other times the dancers run at such speed that they collide, like molecules knocking into each other. They carry each other’s prone bodies; writhe and convulse on the floor, fish drowning on dry land. At one point, two dancers are arranged by the others to rest towards each other in a sort of inverse position to Marina Abramovic and Ulay’s famous Rest Energy piece. 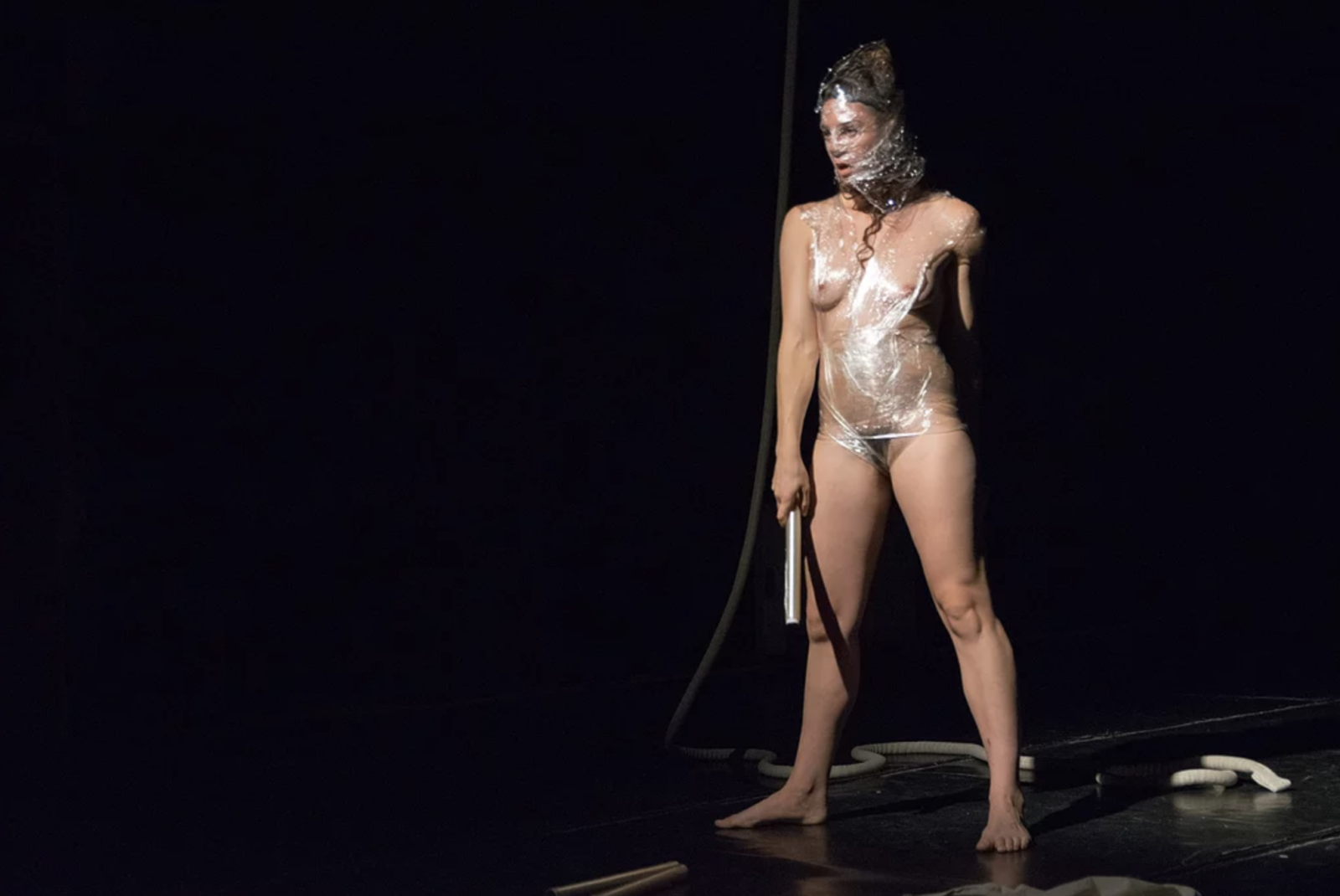 None of the performers has ever danced naked before. “I feel constantly a mixture between strong or vulnerability,” Ieva Navickaite says. Her colleague, Marta Masiero, adds: “Definitely everyone faced some psychological things. We worked towards finding each other and building trust, finding a vocabulary that we could all share.”

The rapport between the dancers is apparent both when they dance and when they chat. It is a multinational group: British (Marley Seville, Paul Davies), Lithuanian (Navickaite), Italian (Masiero, Tommaso Petrolo) and French (Marc Krause). The dancers are representative: white, black, older, younger, differing in body shape. The colour referred to by the word “nude” is almost always salmon-pink, which is obviously not the case. Masiero talks about how the female dancer’s naked body is often androgynous and flat-chested. “For me that was slightly daunting. But [Dep] has helped me accept the way I am and find incredible freedom within my body.” It’s a point all of the dancers agree on.

Repetitive movements are reminiscent of tribal rituals, some primal. While Van Huynh chose the title Dep, which means beautiful in Vietnamese, I ask the dancers if they can describe the work in just one word. Their answers are as follows: “Resilience”, “human”, “an eyeful”, “introspective” and “alive”.

Hours later and after a few drinks, my friend Jess and I are watching a woman scream “I’m coming! I’m coming!” while a dude pops giant bubbles overhead, splashing her with the soapy liquid. This is the Bubble Show for Adults Only (C venues), performed by Bubble Laboratory’s Dr Bubble (Kurt Murray) and Milkshake (Iulia Benze), more often seen entertaining kids. Which shows, because the narrative is pretty much Dr Bubble wooing Milkshake with a giant penis made of foam – but what else but outre fun do you want at 10.15pm, half-cut? The show is billed as a neo-burlesque physical performance – it can’t be easy to categorise a performance that features a baby doll’s face decorating a bra – and the rather brief nakedness is clear titillation, a million miles away from (Some)Body and Dep.

The nudity in Spank! is also self-described gratuitous, because the main thrust (sorry) of the three-hour show at Underbelly is to bring the best and quirkiest of the fringe to a late-night audience. I’d go every night if I were at the Fringe for longer, and if I had the stamina to keep drinking with co-founder James Wren and producer Corrie McGuire until 4am.

Wren admits that the show’s naked element, in which a member of the audience strips off on stage in exchange for one minute of promoting whatever they want, was an idea he had on the spot when the press asked him and fellow founder Leon Fleury what was new in the show that year.

Spank! is a fringe institution and has been going for 15 years, with the nude aspect for the past 12. They have had a volunteer every single night since. “We’ve had people get up for a variety of reasons,” McGuire says. “Some to promote shows, some to raise money for charity … one man did it to promote Croydon.”

McGuire says the volunteers used to skew male, but that has changed in recent years. On the final night of the run, they try to get as many people up as possible. “Last year we had 35 people get naked, which is a Spank! record, but I don’t think we’re quite Guinness Book of Records – although a lot of Guinness was involved.”

The vibe is respectful. “We’re very conscious of that,” McGuire says. Drunk people don’t get selected, and no touching is allowed. Co-host James Loveridge makes it clear that cameras should not be used during the naked promo minute: “Don’t be a dick,” he tells the audience.

I’m back on the buff beat the next night to see Skin Deep at the Gilded Balloon Teviot. This is a cabaret show for a time when a third of Brits deem themselves unhappy with their bodies and cosmetic surgeons are reporting people requesting to look like they do through Snapchat filters. Body positivity is a worthwhile and uplifting movement, but sometimes it can come across a little cloying. Not a bit of it with Skin Deep, which is glorious in its sense of fun and affecting in its message. The performers are styled as “Diana and Her Boys”, and their insecurities include a nose thought to be a little too large, weight worries and acne. The finale sees the guys stripping bare.

Producer Richard Lambert tells me the show evolved from a previous one called Boys in the Buff, but was “developed into something more poignant and relevant”. Shani Cantor, who plays Diana, says the show is “vitally important” because it tells the “journey everyone goes through” with self-acceptance. To this end, audience reaction has been resoundingly positive.

“Which is good,” performer Nick Brittain says, “cos you don’t want to be stripping and everyone to go quiet.” They’ve found the show easy to pitch to people when flyering on the Royal Mile.

I ask if they have any concerns around consent and personal boundary-breaking in this post-#MeToo era. No, they say, because the play isn’t sexual at all. Producer Lambert remarks that: “I always offer to get naked whenever the cast need me to [for support]. Not sure why, but the cast have never felt the need to see me participate. Rude.” It’s hilarious – there is a whole song dedicated to the lack of a foreskin – but doesn’t shy away from the impact of body image on mental health.

Skin Deep sums up my experience of the fringe’s flirtation with nudity in 2018. It is very rarely sexual. Perhaps in times past, the raunch element was ramped up, when getting your bits out was risque. But mainstream audiences are more mature now. The shows I see utilise nakedness as a character or prop in itself; part of the medium of the message, if that doesn’t make me sound too much of a pseud. Naked shows aren’t just playing to queer audiences, or in seedy clubs, or those with an exhibitionist streak.

As for the towels to bring to the venue? Skin Deep is having a night where audience members can also go naked. That is on on 21 August. Do it for Anna Kesselaar.